What is Making the Short Film?

Learn to make films by making a short film over three evenings and a weekend. That’s what our most recent course entailed, guiding our students from the script to the screen.

The three weekday evenings grounded everyone in the basics of filmmaking, covering directing the script, the camera, the actors, and the edit. On the Saturday, the students actually shot the short film, each directing a scene of their choice from a script provided to them, and on the Sunday they edited and screened the project, receiving feedback from the tutors.

The course was nothing short of a success, with a fantastic group dynamic from which everyone came away with fresh knowledge and new friendships.

We asked our participants for their reactions to the course.

“I’ve wanted to learn about making films for a long time and wanted to try to make my own. Starting from knowing practically nothing I joined ELFS Japan’s Making the Short Film course. It was fascinating, really good fun and even better, within a week I feel like I have enough knowledge of the basics to start confidently making my own projects.

“The class had a warm and encouraging atmosphere where I felt comfortable to ask questions, work as a team and really engage with this fascinating subject. I learnt a lot and would highly recommend this course to people interested in film, making films or anyone who wants to have fun gaining knowledge and working with great people.” 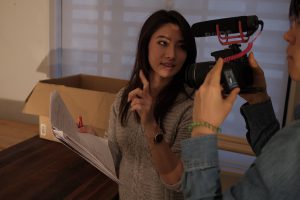 “Thanks for your amazing class! I did really enjoy it.

“I learned so many things from this class. We rarely have this chance to have directing experience so through this class, I came to understand how hard it is for the director to communicate and think about camera/actors/lightning/sound…

“Also, I liked meeting people with the same interests as me – I think this was the most valuable thing. I entered this class as I love photography, but at the same time it links to my job in advertising. Thanks to this workshop, I now know some of what commercials directors have to do and how they do it, which means a lot to me.” “It was an exhilarating week for me as well as, I hope, for the students.

“On the shoot day itself, I was particularly happy to find that as the day went on I was less and less involved, as the students became more comfortable working together as a group.

“I had stressed that the key skill of the director is communication, so to see this group overcome linguistic and cultural barriers to collaborate and each direct Japanese actors speaking an English script, really brought to life what I am hoping to achieve with ELFS Japan.

“We’ll be running ‘Making the Short Film’ again at the end of February, and I’m looking forward to it!”

Interested in joining us for the next edition this practical course? Check the latest dates here – Making the Short Film, Tokyo