There is a decrepit apartment complex around the corner from our new office building called “Tsukumo Sou (つくも荘)”, and according to our landlord it is a somewhat famous location where several Japanese scary movies were filmed. While A Page of Madness was first produced in 1926, this landmark silent horror film was considered lost for over four decades until its director, Teinosuke Kinugasa rediscovered the reels in his storage shed in 1971. Heavily influenced by the avant-garde stylistic movements in Europe and the Soviet, Kinugasa used flashbacks and surreal montages shot with seemingly every filming tricks known at the time to tell a story of a retired sailor who started to work as a janitor of an insane asylum to look after his mentally ill wife locked up after attempting to drown their child. During an era when kabuki and samurai stories dominated the theaters, the avant-garde filmmakers and experimental writers behind A Page of Madness (known as Shinkankaku School, or Neo-Perceptionists) — including 1968 Nobel Prize winning novelist Yasunari Kawabata — audaciously pushed the boundaries of film expressionism and treated film as an art form. The result is a timeless masterpiece that captures true horror — one that takes place within the mind. Japan has many folktales that illustrate the rich culture Japan has to offer, including horror stories that are downright creepy and nightmarish. Masaki Kobayashi’s anthology film Kwaidan is a collection of four distinct tales adapted from the Japanese ghost stories assembled by Lafcadio Hearn, a Greek writer who is best known for his books about Japanese legends and ghost stories (Hearn naturalized as a Japanese  in 1896 and even took on the Japanese name Yakumo Koizumi.) Many Japanese are familiar with the general stories of each of the four stories (“The Black Hair”, “The Woman of the Snow”, “Hoichi the Earless” and “In a Cup of Tea”), therefore this film isn’t like other horror films that spook viewers with surprises. Instead, Kobayashi uses masterful visuals and build-ups to develop a unique mood that make Kwaidan one of the long-time classics in J-horror history. 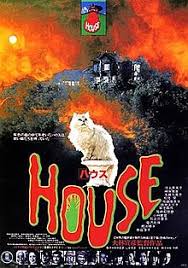 This 1977 filjm has a childish silliness to its horror, and rightfully so. After Jaws made a splash on the screens and box office, major Japanese production company Toho approached acclaimed director Nobuhiko Obayashi to create a similar film that would allow them to take advantage of the Jaws success. Instead of recreating a shark movie, however, Obayashi asked his school aged daughter Chigumi what she thought was scary. Chigumi, freshly out of the bath and while combing her hair replied, “It would be scary if my reflection jumped out of the mirror and ate me!” This childlike perception of “fear” is the basis of this wacky and gory horror story. Chigumi Obayashi is credited for the story, so let’s see the world from her perspective to enjoy this unique Japanese horror comedy film. Pulse is a horror film made for the new century. In this philosophical thriller by Kiyoshi Kurosawa – regarded as one of the prominent J-Horror film directors – ghosts invade the world of the living via the Internet. This film touches on the unnerving and ironic themes of isolation and the breakdown of communication in the modern age where the internet is available as a tool to bring people together and ever-connected. After nearly two decades, Pulse continues to force ourselves to question whether the internet has brought us closer or actually kept us more separated. Director Hideo Nakata is known world-wide for his extraordinarily successful horror film, Ringu (Ring) (1998). His 2002 supernatural horror drama film Dark Water (Honogurai Mizu no Soko Kara – “From the Bottom of Dark Water”) has Nakata’s distinctive chill that helped solidify “J-horror” as a recognized film genre. This film is about Yoshimi, a young woman that starts a new life in a run-down apartment with her six-year-old daughter Ikuko after enduring a terrible divorce case with an abusive husband, who becomes increasingly paranoid and deranged with the terrifying occurrences in the creepy apartment, which are depicted with imagery of ominous water.

Do you have a favorite horror film that will chill us to the bone during the hot summer months? Share them below in the comments!