Creating Short-Form Docu-Series For The Web

In this class taught by Shirley Williams, an Emmy Nominated New York based Producer, you’ll learn how to create a 5-7 minute documentary film through authentic human storytelling. Get advice on the best way to shoot your subjects, structure your scripts and how to use B-roll, music and sound to enhance the quality and emotion of your story. During this class, we’ll take a look at a docu-series piece she produced for www.Refinery29.com that generated over 1 million views and how she and her production team created such an impactful story.

This course would be great for anyone with an interest in creating short documentaries for the web and film festivals. Including vloggers and YouTubers that want to evolve their channel’s content.

Docu-series is a by product of documentary filmmaking. Docu-series is defined as a series that follows a particular person or group of people and their involvement in real events and situations over a period of time. The Academy Awards’ eligibility for documentaries is any theatrically released nonfiction motion picture dealing creatively with cultural, artistic, historical, social, scientific, economic or other subjects. It may be photographed in actual occurrence, or may employ partial reenactment, stock footage, stills, animation, stop-motion or other techniques, as long as the emphasis is on fact and not on fiction. A short form documentary or docu-series, can be any of this sort of content that is told within 3-30 minutes but being able to tell powerful nonfiction stories within a small amount of time can propose itself to be challenging yet fun and exciting.

In this workshop we’ll go through the steps of creating 5-7 minute docu-series stories Learn how to: 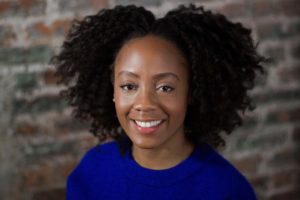 New York based Producer, Shirley Vernae Williams, has overseen many television series such as History Channel’s “Alone” and “American Restoration”. In 2017 she post produced the documentary film “Intent To Destroy” with award winning Director Joe Berlinger which premiered at Tribeca Film Festival. Intent To Destroy was recently nominated for an Emmy for Outstanding Historical Documentary. Shirley is currently a Supervising Producer for Refinery29 and has produced various series for them in the past including “Shady” and “Anomaly” which generated millions of online views. She has worked with companies such as VaynerMedia and Public Record TV, producing content for multiple brands such as Comcast, Shell, Budweiser, Cadillac, Stella and many more. This year she has produced eight short films for the New York Times and a documentary for the Annenberg Space Of Photography.